To ensure Duke Chapel's great musical traditions for the future, the Organ Scholars initiative was created.

With its world-class organs, excellent choirs, and a tradition of fine sacred music, the Chapel boasts a treasure of resources found in no other educational institution in the country. As stewards of this heritage, Chapel Music has the responsibility to nurture, to teach, and to worship God using all these assets and all of the talents of its staff. 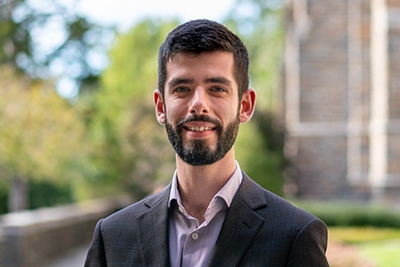 Abraham Ross
Ross performs regularly as a soloist and an ensemble player with special interests in early music and twentieth-century repertoire. In May 2018, he completed the master of music in historical performance at Oberlin Conservatory, where he studied organ with Jonathan Moyer and harpsichord with Mark Edwards. As a performer, he has appeared in concert venues throughout his home region of the northeastern United States, as well as in Canada and Argentina.

As an Organ Scholar, Ross is studying under Duke Chapel Organist Christopher Jacobson, a Fellow of the Royal College of Organists.

In his free time, Ross enjoys engaging in dialogue with other artists, cooking and generally enjoying food, as well as hiking, skiing, and running. 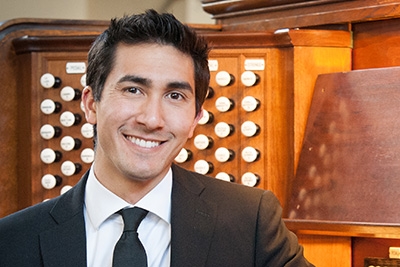 Joseph Fala
Fala, from Honolulu, is a recent graduate of the Yale School of Music where he earned a master’s of music in organ performance.

He began organ studies with Katherine Crosier at home in Honolulu where he served as organ scholar at Central Union Church. A recipient of the Porgorzelski-Yankee Memorial Scholarship from the American Guild of Organists (AGO) and the Robert Baker Award of the Yale Institute of Sacred Music, Fala has competed and won prizes in the AGO Quimby Competitions for young organists, and the Albert Schweitzer Organ Festival, Hartford. Recently named one of “20 under 30” by The Diapason Magazine, he was featured at the Organ Historical Society’s 2015 convention in Springfield, and has performed across the country, including at St. Patrick’s Cathedral in New York City, Trinity Church Boston, Our Lady of the Angels Cathedral in Los Angeles, Harvard University’s Busch Hall, and the Washington National Cathedral.

In addition to his training as an organist, Fala also graduated from Rensselaer Polytechnic Institute with a bachelor’s in architecture and a master’s in lighting.

Montgomery, a native of Raleigh, is an undergraduate student at East Carolina University where he is pursuing degrees in sacred music and chemistry.

Beginning his schooling as a pianist, Montgomery began studying as an organ major in 2014. Last year, he was awarded his Colleague certification in from the American Guild of Organists (AGO) and was serving as organist at the Memorial Baptist Church of Greenville, North Carolina. He has appeared in concert in Roanoke, Virginia, and Raleigh, North Carolina, and will concertize in Wilmington, North Carolina, this fall. Studying organ under Andrew Scanlon, Montgomery has performed in masterclasses for Dorothy Papadakos, Dr. Janette Fishell, Dr. Mickey Thomas Terry, and Dr. Ann Labounsky. In addition to his certification from the AGO, he is a recipient of the Olive G. Long Memorial Scholarship for Piano, the Clay J.H. Organ Scholar Endowed Fund, Thomas Jones Scholarship for Chemists, and the Franklin Ritter Scholarship for Chemists.

Montgomery hopes to pursue a career in medicine and research, while maintaining a position as an organist.

Surber, a senior at UNC-Chapel Hill studying journalism and organ. A native of Greensboro, N.C., Surber is active in The Episcopal Church, playing organ for evening services and singing in two choirs at the Chapel of the Cross in Chapel Hill, N.C. In addition to studying organ, he has been a harpsichordist for UNC-Chapel Hill's Baroque Ensemble.

Prescott, a native of Greenville, N.C., and an undergraduate student at East Carolina University studying organ performance. Prescott was the 2014 winner of the VanSciver Church Music Scholarship in Organ from Metropolitan Music Ministries and was also awarded the 2015 E. Power Biggs Fellowship from the Organ Historical Society. He has held music positions at St. Paul’s Episcopal Church in Greenville, N.C., and First Christian Church in Farmville, N.C.